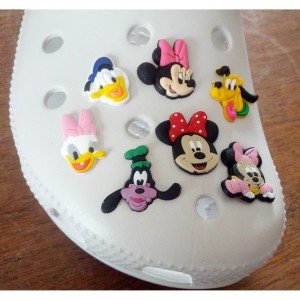 Jibbitz are shoe charms which are fitted into the holes on croc style shoes. They are the craze with little kids. So make sure to include some jibbitz shoe charms for crocs among your birthday favors, in halloween treat bags and as christmas stocking stuffers. They come in sets of 6 to 20 pieces and are ideal for Birthday Favors, Treat Bag Gifts and Stocking Fillers.

There is an amazing variety of the shoe charms now available. Take a look here at some of the popular ones. Many of them can be modified for other uses such as for bracelet charms

Disney Jibbitz Shoe Charms:All the favourite Disney Characters of Disney feature on jibbitz sets. This includes Mickey and his friends, Disney Princesses, Phineas and Ferb, The Little Ponies, and the characters from The Toy Story movie and Cars 2 movie. 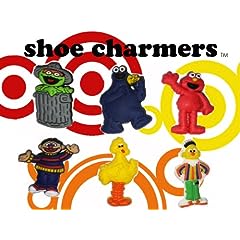 3D Crocs Jibbitz Shoe Charms: 3D shoe charms are really cool. They project out from the shoes like real life characters. Water creatures such as sharks, dolphins, mermaids and dragons are most suitable and realistic.

These nintendo shoe charms and bottle cap magnets and stuff are well made and and donot break off easily with all the Jumpping and running of boys&quot; feet.

Thomas the Train and Friends

For DIY Enthusiasts. If you would rather make your own croc decorations, the Croc a Doodles Kit contains glitter colors to decorate your croc shoes.

These are washable colors, so you can experiment without fear of messing up!

The webmaster of Dont Pinch my Wallet.com is a participant in the Amazon Services LLC Associates Program, an affiliate advertising program designed to provide a means for sites to earn advertising fees by advertising and linking to amazon.com.
Go to mobile version